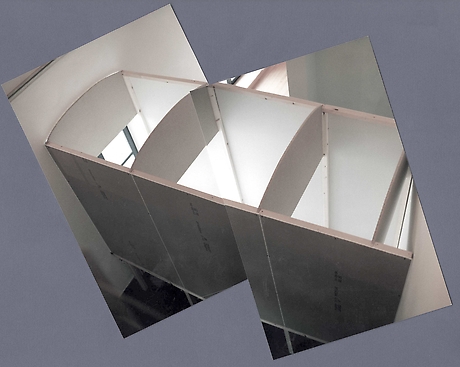 The title refers to ‘my possession or ownership’ of the old railway station, now a converted contemporary art gallery, which in earlier years relayed workers and material to feed the prospering iron mine/steel industry in southern Luxembourg. I became intrigued by the renovation architect’s decision to block up a number of windows.

The shapes of these windows, the historical references to mines and passing railroad cars converged as complementary ideas and forms, finally realized in three built structures. Each structure was physically connected to a window opening, but with restricted visual accessibility. Gallery lights were turned off to accentuate the structures’ effects on the gallery space, which became darkened and mysterious.